Susi's ears appear to be nice and pert now. I will continue to add gelatine until next consultation with Vet. 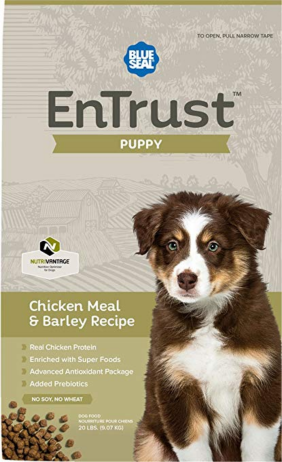 On this date Susi had about 1 ½ cups of "Purina Sport Food" left. I went to Blue Seal to learn what type of food they carried for puppies. The sales associate strongly suggested that I go with the "Blue Seal Entrust Puppy Chicken Meal & Barley Recipe". I read from the packaging the types of ingredients that were present in the food. Noticing a toll free number for the company I called Kent Nutrition Group from within the Blue Seal store to learn more about their product. Specifically those ingredients sourced from China. The Customer Care Advocate I spoke with assured me that everything was sourced from North America. Nonetheless, I still had reservations as to whether or not this was 110% certain. The Customer Care Advocate offered to speak with food experts on her team to verify with certainty. The following day I was contacted by the same person and assured that the food was entirely North American sourced with exception to one ingredient called "DL-Methionine". This ingredient is imported from Australia. Associate further assured me that not one single item, component or ingredient is sourced from China.

Dog owners have questioned if methionine is found in meat and fish pet food ingredients, why would the supplement DL-Methionine be added to pet foods?  “For diets that contain minimal amounts of meat proteins, are heavily weighted to vegetable proteins like soy or are low calorie foods diluted with inert ingredients such as cereals and cellulose, there may be a need for supplemental methionine.” Some pet foods add DL-Methionine “to help promote the palatability of the diet.

I purchased a 6 pound bag of food. At home I took the remaining Purina food and mixed it with an equal amount of the Blue Seal Entrust Puppy Chicken Meal & Barley Recipe I purchased. Susi did not present any sort of displeasure with the change.

Susi remained on the feeding intervals of 06:00, 15:00 and 21:00 while receiving ½ cup of food during each meal. In addition to this, I still added about ½ cup water and ½ teaspoon Knox brand unflavored gelatine.

I purchased Susi on 15 December 2018. The breeder I purchased Susi from fed the litter "Purina Sport Food". Susi was on a feeding schedule which consisted of three meals a day. Meals were served at the following times: 06:00, 15:00 and 21:00. Susi received ½ cup of food during each meal. In addition to this, I added about ½ cup water along with Knox brand unflavored gelatine. Gelatine was added to Susi's diet in order to help build cartilage in his ears.

Breeder advised that at 6 months (16 April 2019) Susi will need to be fed twice daily. Late night feeding will drop and afternoon feeding will move to 17:00. The amount to be served will be calculated by totaling the amount of the very last days three meals and dividing by 2.